After numerous emails, meetings in foreign lands and changes to the statutes, PostgreSQL Europe finally opened it's doors to new members today, of which I became the very first. Well, OK, technically I'm the fifth, as the elected board made up the first four, but I was the first non-elected, fee paying member.
So 'what's the point?' I hear you cry, and 'why should I part with my hard-earned cash?'. Well, joining PostgreSQL Europe costs €10 for 2 years membership, which is a fraction of what some other groups charge. You won't get a postgresql.eu email address for your money, but you do get the chance to vote for PostgreSQL Europe board members of your choosing, at the annual elections. Those four board members (who will become five after the upcoming elections) decide what events and activities the not-for-profit organisation will be involved in, and how to spend the money - what events should be sponsored, what swag should be purchased and so on.
Membership is open to anyone resident in geographical Europe (including all of Turkey and Russia), so if you want to join and play a part in the future of PostgreSQL, you can sign up on the postgresql.eu website. Don't leave it too long though - you need to be a member for at least a month to be eligible to vote in future elections.
Posted: 19:28 3 comments:

Some of you may be aware that some time ago, Redhat's legal team changed the description of the PostgreSQL licence (yes, that is correct where I live - please don't email me to tell me I can't spell) from BSD to MIT. After doing some poking around (it helps when your boss's boss is an ex-Redhat exec) it transpired that they considered that our licence looked a lot more like the MIT licence than BSD.
It's true that ours doesn't look like the traditional BSD 3 or 4 clause licences - some people had already spotted that, but as it came from Berkeley we always just considered it to be a variant on the simplified BSD licence. The long and short of it was that lawyers said "no they're not the same", and we said "well it sure ain't MIT" and much discussion ensued.
The solution it seemed, was to try to get our licence recognised and approved by the Open Source Initiative. I originally tried to do it as an official BSD variant, but that wasn't accepted. I then resubmitted it as 'The PostgreSQL License" (yes, I know :-p), which was rejected as it wasn't a generic licence (OSI are trying to ensure that all new licences are resuable). Finally, I submitted it again with placeholders replacing the project name and copyright holder info, and nearly two months later, it's approved!
So there you have it ladies and gents. "The world's most advanced database with freely available source code" now actually is, officially, The world's most advanced Open Source database"!
Posted: 15:58 3 comments:

If you've been involved in the PostgreSQL project at all in the last few years, you'll know that Josh Drake has been organising the PG East and PG West conference series since 2007. When we met in Paris at PGDay.EU, JD suggested that I submit a talk for East in March.

Which got accepted.
So now I'm travelling to Philadelphia in March :-)
Since we spoke though, the crack marketing team here at EnterpriseDB contacted JD and between them hatched a plan to make East the most impressive PostgreSQL conference to date. It'll be held over four days, at the Radisson Plaza - Warwick Hotel in Philadelphia, from March 25th to 28th and will include content for C-level execs and decision makers, as well as the regular crowd of database geeks like me. Of course, there will also be the traditional EnterpriseDB Party on the Friday night - if you haven't been to one of those yet, now's the perfect time to see what you've been missing out on!
So if you've been toying with the idea of going to a PostgreSQL conference, this is the perfect time to give into the urge and join us in Philly for database talk, beer and cheese-steak sandwiches. Mmmmm, cheese-steak....
Posted: 13:24 2 comments:

Well, FOSDEM 2010 is now over and it all seemed to go pretty well. The PostgreSQL Project was represented well (as one would hope for our second biggest annual European gathering), with the majority of the Hotel Agenda Louise seemingly occupied by database geeks.

On the Friday night we had a database dinner at Les Brasseurs de la Grand Place where we were joined by Sergey Petrunya and Kristian Nielsen from MariaDB. Good conversation, good beer and good food followed later by an aborted attempt to join the FOSDEM Beer Event at Cafe Delirium (it was just too busy) and a successful landing at the Irish pub a short walk from the Hotel. 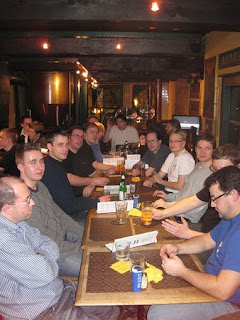 Saturday morning was the start of the conference itself. We'd hoped to scrounge an extra table (much needed, with the number of people and the amount of swag we had), but unfortunately that didn't work out. Somehow, we managed to squeeze onto one. 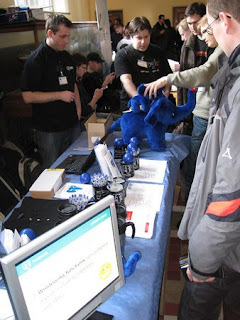 The talks started at 1PM in our dev room (which we only had for Saturday afternoon unfortunately). Magnus and Jean-Paul started with report on the state of PostgreSQL Europe, and then it was my turn with my talk on "Developments in PostgreSQL 9.0". Slides and the full schedule can be found on the PostgreSQL Wiki. The dev room was basically packed solid with people sitting on the floor for every talk. Please FOSDEM organisers - give us a bigger room next year! 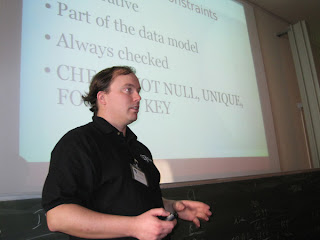 Saturday night was a late dinner at possibly the slowest restaurant in the world, who clearly weren't expecting too many diners. Food wasn't too bad though, when it finally arrived.

Sunday was spent mostly on the booth and (in my case) in lots of ad-hoc meetings on topics such as the new PostgreSQL project infrastructure thats in development, as well as PGDay.EU 2010 which is being planned in Amsterdam.

Most of us left at around 5PM, with Heikki, Greg, Magnus, Stefan and I heading for the airport. After pizza and a brief scare when Stefan lost his boarding pass, we left for home. Goodbye Brussels, see you next year.